The waning summer of my dirty 30's 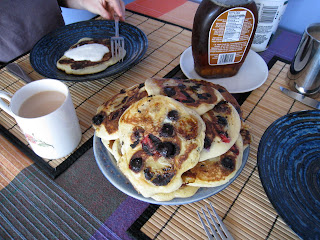 Well, generally speaking my "dirty thirties" as they sometimes call the decade of your thirty something years is almost at a close.  Is that significant?  Well, it doesn't feel like much is going to change too quickly, but I guess it's a milestone of sorts and people do say that things do start to change around this time in your years.  I have had a lot of adventures in these years at any rate.  Compared to my twenties it's been quite a whirlwind and in a good way for the most part.  In these times if you can live a decade of life and note mostly good times, that's a plus I say.  Taking quick account: my living situation has improved, I have a great relationship, I live in a desirable and moderately glamorous city, and I can afford to eat relatively healthy food, like home made blueberry and strawberry pancakes for example.  It's all pretty good stuff and I'm still more than a (possible) decade away before the cracks in this great scheme we've made for ourselves in the western world totally start to widen and spread revealing the rotten centre and give way to the torrents of woe that tarnish the rest of the globe.  At least that's what the experts are predicting. 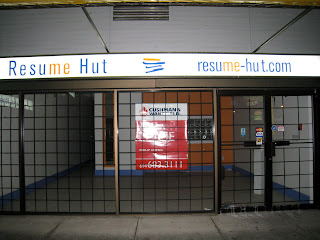 Speaking of our times - I was out walking with some chums the other night on the strip heading to a bar. We passed a non-descript and darkened shopping plaza when I spotted this business which I think outlines our times quite nicely.  A business that thrives on the need for people to hire other people to help them look for crappy jobs is sign enough of things sliding downhill, but when that business itself goes tits-up it's time to put a lock on your gas tank and stock up on canned consumables.  I'm probably overstating things, but it's something to be looking out for at any rate.  Keep your eyes fixed on the horizon I always say and don't forget to look over your shoulder occasionally too.  Speaking of which, summer is here so if you are unfortunate enough not to have have gainful employment, enjoy your time off as much as possible.  Whew!  It's always hard to leave thing on an up-note for me which, considering my situation shouldn't be, so I'll just sign off before I think of another dire thing to say.
Posted by two-way at 10:05 PM