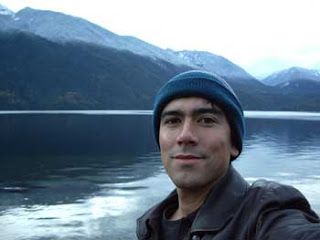 See you later green north. As it stands I only have a little bit of time left before my big departure. I'm starting to get excited. Those pangs of worry mixed with pangs of excitement mixed with pangs of not knowing what will become of me. This will be the longest time that I have ever been away from my friends and city so I'm ready for the pangs of missing all my friends mixed with possibly the pangs of dysentery to boot. When I leave somewhere you always feel like I've got all this stuff I have to do before I come back home. I also hope that I don't turn into one of those "travel" people. Not that traveling around's not fun and a great way to spend your life, I just never thought of myself as someone who travels from place to place all the time getting new friends and leaving others, dispensing with them like cheap underwear bought in desperation. I'm more of a rooted person. At least I like to think I am. I welcome anyone's unsolicited advice about travel and you can post in the comments section of the blog as I will be reading these comments from time to time. Actually, it turns out that my "comments" are not working for some reason. I'm not sure why and I'll try to fix the problem, but I'm not promising anything. My faculties with the world of web are limited. I'm not too excited about traveling on US election day, but I guess those are the risks you take. You can always e-mail me if you want to tell me what you think of my blog or anything else for that matter. Bye for now.
Posted by two-way at 2:05 AM 6 comments:

It's getting grey and drippy here. Soppy alleyways and steamed up busses. I guess it's the nature of the beast. Well. I'm pretty sure no one of note checks this spot, but in case you do I'm sure you've noticed by now that the blogs are not coming fast and furious. I blame Lack of material among other things. I could fill you in on all the minute details of my life, but there just isn't that much to tell these days. Most of the people who'd ever read this are leading more eventful lives right now, but that'll hopefully change when I finally get out of Terminal City. Uh, I dunno-... Well, it's getting cold now. Cold means layering up and turning on the heat. I still haven't had to turn on the heat in my apartment yet, but it's coming. Luckily, I'm planning to leave for Mexico City soon so I'll gain a few degrees once I get there although the other day it was only 16 degrees there. That's not hot by any means. I'm told that it gets pretty cold there in the winter. I'm planning on having a going away party sometime at the end of Oct, so the invites'll be comin' your way soon... You know who you are. Commercial Drive is as much the same as always. Same samosas in the samosa heater at Sweet C's same scowls from the baristas at Joe's. The big bust up at Da Kine was news. They were selling bud bags over the counter and I don't blame them especially when I heard about the 20 grand the proprietor had on her when she was arrested. The wierd thing are all the loyal pot-heads who loiter around there now waiting to buy. Occasionally I'll see this dude out front with a pail asking for donations for their legal fund. Really, does someone who has 20 grand in pocket change need dough for an attourney? None of my friends here in Van Can really seem to be going out these days including myself. What is it? Bad weather? Old age? Could it actually be old age? Somehow, the thought of that bums me out. Say it isn't so. More later.
Posted by two-way at 3:19 AM 7 comments: