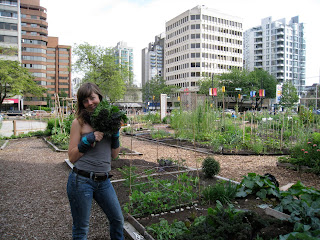 We're pretty excited as it seems that we're actually able to grow a few things here in the middle of downtown Vancouver. I mentioned a few posts ago that we were trying our hand at urban gardening - well we've already begun to reap the harvests! Small harvests mind you, but, there ain't nothing wrong with free veggies no matter how few in my eyes. So far we've got some pretty healthy looking kales and a coupla fairly healthy zuchini plants. The growth and success of the latter being especially surprising. We are already munching on the kale and have some nice zuchinis in our fridge. Some of our kales got attacked by root eating maggots which was kind of gross and a bit disappointing but it did free up some space for some tomato plants so we shall see. So far we've just put seedlings and seed in the ground, watered it and boom! Up came these veggies.  We did buy some pretty decent compost for the garden and we used some fairly wormy compost from the compost bins to add growiness to the soil. 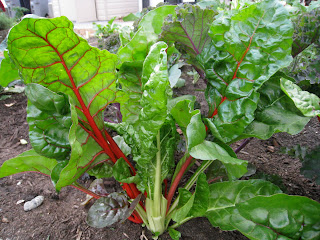 As you can see the chard is doing pretty good and our zucchinis are already quite mature.  I'm actually afraid they are going to outgrow the box and start encroaching on our neighbours plots.  Aphids are abounding on most of our stuff but we've been killing them manually so far.  These photos don't really do the garden justice, but if you could've seen this area as the empty gravel lot it was before the community garden moved in, you'd realize the transformation.  So far it's a lot of fun. Maybe I finally had to come to the city to be a country farmer type, but let's not get too carried away. 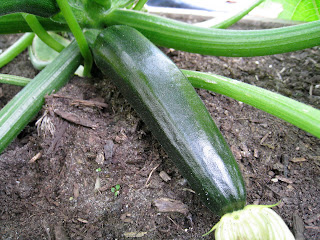 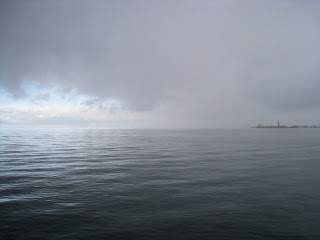 I seem to be getting sick about half the time these days and the other times in-between bouts of recovery so that everything seems to be merging into one long sickness.  I'm not sure who to blame it on.  Most likely, is it my general lackluster attention to personal health and water-drinking etc. But could it also be the weather or something in the environment around me?  I'm exposed to a lot of disease at my workplace.  Contrary to intuition, health food stores are a great place to get sick.  Mainly this is because there are lots of people in an enclosed space, but I think there are some other, more unsavory aspects of the atmosphere in health food stores that also contribute.  Most stores are dusty and mine is no exception.  Dust can trap bacteria and mold irritates the throat and sinuses making them vulnerable as well.  Refrigerators are cold and shock the immune system.  A busy store can be a stressful place and stress as we all know is a big factor in sickness.  Here's where I may get into trouble but I'm going to say it.  Vegetarians and counter-culture artisto-types  are also hotbeds of bacteria and viruses.  It takes one to know one, but I can personally attest that Vegetarians often need to supplement their diets with foods that "beef-up" the bodies resistance that aren't beef itself.  Not all vegetrons pay attention to this and this is where you get the pale waif effect so often seen.  That's when the diseases pounce.  I've lived in basement hovels with several roomies before and while it's usually a groovy good time, not every one pays the same attention to personal hygiene and with lots of people coming and going and slopping the cutting-board with onion and garlic finger juices so do their diseases.  To add to this Vancouver has had a fairly cold and drippy May and early June so far.  Cold and drippy outside - cold and drippy inside.  Anyway, despite all this, not everyone is as sick as I am so it's also got to be about something I'm doing or not doing.  I'm sick of being sick and making others around me sick as well.  It's time I took my fingers out of my mouth, sanitize the keyboard, hit the treadmill and exorcise this demon of disease from my lifestyle.
Posted by two-way at 1:14 PM 7 comments: