We now have a cat on premises.  He's been here for about 7 months now actually, but I haven't shown any pictures of him.  His name's Lloyd and he's a friend of the family who suddenly had no place to go due to an untimely change of residency by his owner.  No matter - we took him in and although at 14 years of age he's pretty long in the tooth to be moving from place to place he's still got a lot of youthful energy for an old coot.  He chases stuff and likes to attack legs and hands at a moments notice and even draw blood if need be.  Mainly though he sleeps the days and nights away when he's not doing the eating or attacking thing. It's mainly good to have a nice omen of good luck around.  I hear that in many countries and in many cultures cats are considered a sign of good luck and prosperity, which is surprising since he seems to cost upwards of 50 bucks a month in food and cat sand.  The latter of which there is nothing "good luck" about.  I'm guessing ancient Egyptians and Japanese people had no sense of smell.
Nevertheless I'm planning on getting most of my investment back once I hit the casinos with this guy.  Lloyd in all seriousness is very sweet and friendly most of the time.  He likes pats and scratches even more and will sometimes keep your feet warm at the foot of the bed.  It's always nice to stare at the gently heaving belly of a curled-up cat on cold mornings or when you are totally stressed out.  Other than that though, he's been a big inspiration to me - mainly to get off my feet and on my ass and do some heavy napping with chow breaks in between.  Now i know why shut-in's always collect cats - it's a birds of a feather kind of thing.
Posted by two-way at 4:46 PM 13 comments: 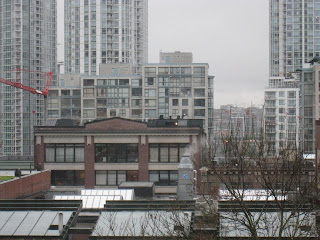 Basically - yeah.  I'm just sitting around.  The last few weeks have been pretty blah and the weeks before that weren't anything to get too excited about either.  Looking ahead looks pretty unexciting as well, but I am planning a trip early next year to tropical climes so I don't really have the right to complain too much.  I seem to be spending quite a bit of my free time on the "web" lately which is not abnormal, but it has gotten me to thinking - "What's with all the time spent on the web?"  What for?  What's it all leading up to?  I guess on one level it's basically a new kind of TV especially because we don't have one.  I guess when surroundings like this pic are all you have, the internet starts to look pretty interesting.  But it's also keeping me from doing fun and productive things, non-internetish things, so I think I should try and limit myself.  Things are also getting kind of Christmasy around here.  Some people in one of the apartments across (it might even be one of the ones in the picture) have already got a tree up!  Didn't these peoples mothers teach them that things are all the more enjoyed when the tension of waiting builds a little bit?  Christmas is fun, but I start to feel pretty grinchy when people get all crazy and overanxious.
Posted by two-way at 10:47 PM 12 comments: