Exposure to the Elements 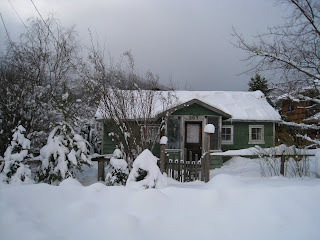 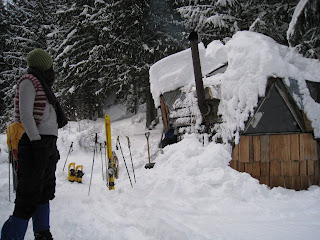 It has been a long and cold winter in these northern climes! It seems as if the weather is just beginning to turn, but in Vancouver you can never be too sure. Here's a taste of what kind of snow we had this year up in the kootenays. This is my father's house in New Denver, BC which is just north of Nelson. My girlfriend and I were up there for New Years which was really nice. It's good to get out of the city and get into the elements from time to time, especially when you're lucky enough to call that place your childhood home. We snowshoed up into the hills for a great afternoon in this small geodesic dome which was made by a family friend in the 1970's deep in the hills of former silver rush territory and now deep in the hills of snowdrift and wildlife territory. My girlfriend has been reading a book entitled, "Plan B" which talks mostly about the impending doom of global warming and the great fall of the global human empire. Basically it says that things are going to get bad, but some things can be done to make the bad not so bad, but if those things aren't done... Ever watch any of the Mad Max movies? Don't be surprised if your grandchildren are taking orders from a midget riding on the back of a giant S&M clad hooded enforcer type who "runs bardertown". We're going to need all the geodesic energy we can get!
Posted by two-way at 11:57 AM 40 comments: