When the Fit Hits the Shan this is where I'm running... 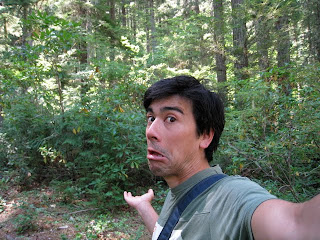 I had never actually been to an intentional community before but this summer I went to one down near Portland, Oregon with my Gal and we had an awesome time! We weren't exactly staying in an intentional community, but we were staying at a kind of retreat which was run by members of an intentional community that was also attached to it called Breitenbush Hot Springs. Now this was a real hippie retreat kind of place where you pay to play in the relaxing and rejuvenating thermal waters of the deep woods. Clothing was optional and most people seemed to be choosing the "non-optional" option but with a certain amount of modesty. Meals were all veggie with vegan options and the atmosphere was very down to earth and not rife with any ingratiating behavior nor were there types of people who expected that kind of experience; no towelboys, no pillow mints. However the place was totally clean and well-run and generally, the opposite of what you'd expect from hippies in today's world. I was beginning to think maybe these people aren't hippies at all, but some kind of neo-hippie hybrid. They didn't allow alcohol or drugs on site which I suppose is pretty understandable because, well, it's a retreat where a lot of people go to clean-up or detox or whatever. I guess that's what retreats are for - getting away from all the nuts stuff that we don't like about where we live and work. I guess I can't find fault with that - yet. What was startling about the place actually, was how well-organized it seemed. Basically, the heart of the place is a three story lodge with several communal rooms and a large dining hall and another building which houses a kitchen. There was a giant industrial composter. There was a run-of-river power plant. There was a geo-thermal heating system! These people had really done their homework not to mention tapping into some deep pockets. This complex is surrounded by numerous "natural style" concrete and rock pools and some nice stone tiled tubs full of naturally hot clean mineral water that bubbles up through crevices deep in the earth. I don't have a lot of photographs of the pools obviously because usually there were a few people around and usually they were naked. If you wanted the fully pampered experience you could rent a small cabin with beds and a bathroom, but there are communal bathrooms which are very clean and sufficient. If you camp, like we did, you can get away with paying only 56 bucks a night and that included 3 big veggie meals and full 24hr access to the hot springs and sauna. It's pretty relaxing and luxurious. 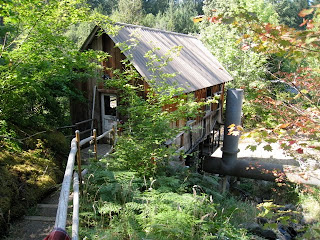 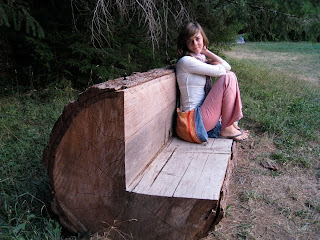 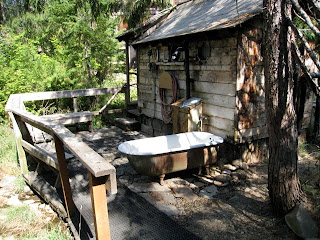 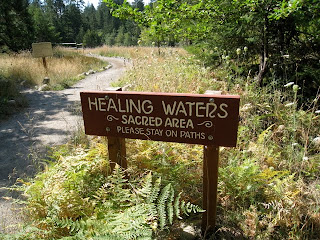 This was the amazing steam sauna which was ingeniously positioned right over a super-hot geyser that continuously gushed hot steam up through crevices in the floor. 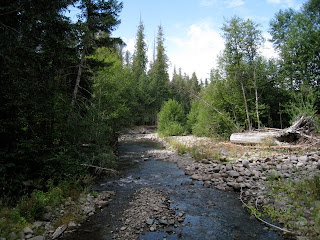 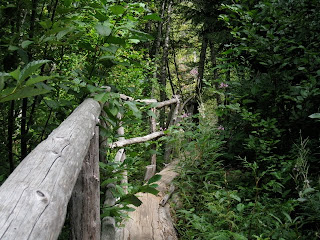 I don't think I've ever been anywhere as relaxing as this place, and I've been to some pretty relaxing places. Now I know why so many people like to bag-out at one of these spa-retreat kind of places. Not only are the grounds of the retreat nice, but there are numerous places around to go on little day hikes or short walks. The area is beautiful as it is nestled deep in the Willamete National Forest and on the banks of the Breitenbush river. We did walk through the area across the creek where many of the people who work in the hot springs live and it seemed like a nice place with a close knit and communal structure. People had seperate dwellings and they even got to share their own hot springs pools. All in all it seemed fairly idyllic or at least leaning that way. Living so close to people and so inter-meshed with everyone's goals can be challenging. Most of the people I know who've lived in co-ops usually do because they can't afford to do things on their own or at least don't want to pay for the luxury. I imagine more and more people will be turning to these kinds of solutions as times get tougher. Maybe this seems ominous, but I don't hear anyone talking about how times are going to get easier in the next 50 years, so it's best to look at positive things that may come of it I guess... Co-op or communally-minded life isn't for everyone though and possibly not for me, but it's nice to see that someone's doing it somewhat successfully. Maybe if the sh*t does hit the fan we'll all find ourselves rolling our luggage up some logging road looking for people like this.
Posted by two-way at 11:26 PM 8 comments: