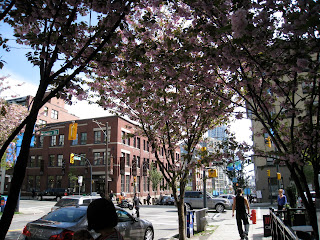 Well. Summer is almost here and since we've gotten back ito the city we discovered that the waiting list for a community garden moved up and now we have a plot. It's pretty small, but there should be enough space to get some veggies going. The plot is right on the corner of one of the busiest intersections in Vancouver, so it's kind of weird to be gardening in the roar of traffic, but when the plants get high in the summer it really transforms the corner- birds chirp, bees buzz by, some people just stroll through to check out whats going on. We probably won't care too much about the traffic when we're munching on fresh greens! So far we've been experimenting with a few kales we bought. Plugged em in there and returned a few days later to find a bunch of the plants dug up and animal fur tufts around. Not a perfect start, but that's the way with gardening I guess. We're pretty much learning as we go so we'll see how successful we are this time around. We grew some really enthusiastic cherry tomato plants in our living room last year but they never produced a great bounty of tomatoes and they were kinda smallish. Finally the plants began to bristle with aphids and we ended up throwing them out in disgust! Thanks nature! Well anyway, this time we are back and this time we have bigger plans. We are planning to harvest the very power of the sun and the earth itself and use it to make us some vegetables.
We've been eating quite a bit of veggies recently. After 3 months of high meat and starch content meals it's nice to eat on the greener side. 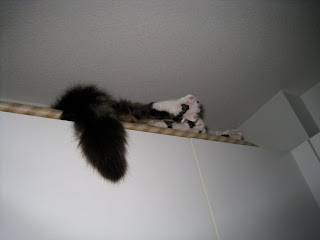 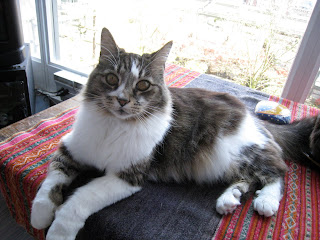 On another note we've got a great new cat Lloyd who just moved into our place. He had no where else to go so we took him in. We had another cat here before, Steve, but he went back to his owner so it's nice to have another hanging around. Which is pretty much all he does. So far he seems to be settling in fairly nicely, but since he previously an outdoor cat, the indoor life is proving to be challenging. Especially when he's only got a few hundred feet to wander around in. I think we'll be needing to buy a cat-tree soon! He's become a bit neurotic and has taken to attacking legs and feet at all hours and tearing around the place even though we've invested in a catnip-infused scratcher, various fake mice, and make string-fluff chaser things but maybe that's just the way it is with cats.
Posted by two-way at 10:01 PM

Definitely get a cat tree, and try putting some shelves on the wall lined with carpet. Your little Lloyd-minster sounds like he needs some serious stimulation!