Up to the BC interior to visit family 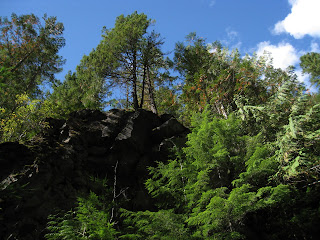 My family live in the BC interior as many of you know and it's beautiful up there most of the time and super beautiful in the summer and even the late summer so I was pretty happy to be able to drive up there and visit a few days with my father.  As usual, not much happened which was pretty much what I wanted to happen.  We sat around and talked, caught up, and went for a really nice day hike up a mountain biking trail.  Mostly I hibernated in my fathers small house and ate dried fruit and drank wine at night.  It was a nice time to be in his little town of 300 or so people as most of the tourist rush had passed and people seemed to be slowly returning to a kind of mellower way of life.  I bought a sandwich and a small pizza at a new pizza place that opened up down the road.  Those were key events.  These shots are from the day hike we went on. 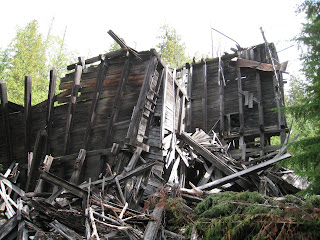 There is an abandoned mine concentrator on this trail above town as well as the remnants of an old mining camp.  The hills around here are full of discarded mining equipment both old and newer stuff left behind by hopefuls and a few lucky strikes.  Apparently the man who owned this giant affair and lived above it in a mansion was ruined by the time the mill closed; his fortunes squandered.  This camp was surprisingly developed.  It had piped water and many amenities like butchers and barbers and the like... 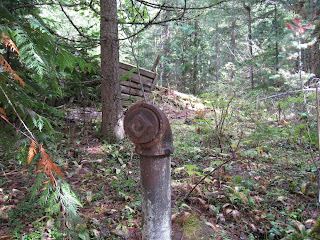 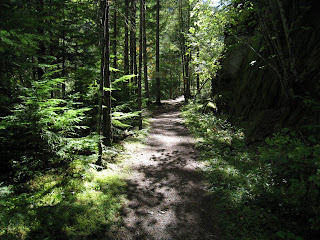 this trail is really nice.  It hugs the shady side of the river valley it runs along and has some nice biking spots including a tram to cross a river. 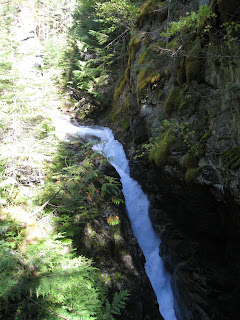 Here's where the river pours and blasts through some narrow rocks.  Well I didn't see much wildlife until I embarked on the long drive home.  Right on the side of the road I saw mountain goats, and then later a moose and finally nearing Vancouver, a bear.  It was almost ridiculous to see so many animals wandering around all at once, beer commercial ridiculous, but it's good to see the big creatures up and about even if you have to blast by them going at a hundred kilometers an hour and they always kind of have this slackjawed dumbfounded expression on - except the beaver that me and my gal saw once.  That guy was pissed off.