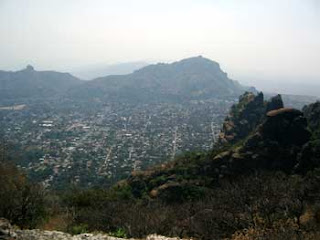 Here is a picture of the place "Tepostlan" or something like that that we went to last weekend. As you can see, it's beautiful and the picture doesn't do it justice because there are lots more of those rock formations all around the valley. It's full of colorful, small birds too.
Well. It's Friday night and I'm here blowing time on the internet once again. I guess I just miss all my homies in the couv' more than I thought I would. I went on a day of driving with Ale yesterday to check out some areas of the city while she did some errands for her work. It's a stressful thing getting around here. There is a constant traffic jam basically from 7 in the morning till 9 at night. Gridlock is constant in some areas or moving at a crawl. While you're in the car choking on the fumes of the minibus in front of you there is a traffic cop, out there in the middle of it all attempting to wave people in all manner of directions, some of his brothers on the side razzing thier sirens and yelling through the cop-horn for people to "move-on" or "nothing to see here", children dodging between the cars selling you food and other services. There are no lanes. People weave more than the Weavers themselves did. This is something I've learned about Mexico City. Because it takes forever to get somewhere, people are often a bit late for things. It could take you an hour or more just to go to another part of town depending on what the traffic is like and it's very unpredictable. Often you'll be cruising along on a large freeway and then suddenly the whole thing is closed for roadworks and you have to crawl along at walking speed or slower for 30 minutes. I guess the same traffic problems as anywhere, but very common and unpredictable. It can be exciting at first because of all the noise and activity, but I can see how commuting in this horror every day could wear on one's nerves.
Posted by two-way at 4:09 PM