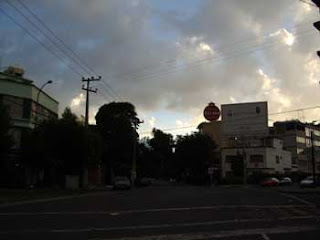 Ok. I arrived safe and sound here in Mexico City and things are OK so far. This place is quite crazy. I haven't done much so far to adjust myself to the new climes. I guess I could always go out exploring, but I still have some in-trepidation. I'm not sure why. I guess since I'm planning to be here for awhile, I may as well not get too over-zealous about seeing everything in the city right away anyway right?. I'll just cower here in the apartment and listen to the tamale whistles and all the other insane noise. It beats cowering in my apartment in Vancouver, right? OK, so - Mexico City is polluted and dangerous. I can't quite believe it. The smog here is really something else. People here seem to suffer from lots of health probs. The other night I had trouble sleeping because my nostrils were burning and my eyes were watering for no apparent reason. I feel sometimes like one of those farmed salmon in a cage with ten million others eating and drinking and breathing contaminated water and air with sea lice hanging off of my gills. Sometimes anyway... Reading the Lonely Planet guide to Mexico City isn't really doing me much good either in the feel good about Mexico City arena. They've got all these stats about how bad the air and water pollution is here and about all the drastic environmental problems, fecal dust clouds etc... No one told me about the fecal dust clouds! I imagine David Suzuki ominously narrating my morning view past the World Trade Centre. "Clay's feces travels outside of the city to a settling pond, only to be swept up and fall back on his head days later in the form of a fecal dust cloud. It's nature's way of saying, that it's not that easy to get rid of feces." I imagine like a lot of huge 3rd. world cities Mexico City's got this "at any moment this whole place is going to go tits-up" kind of feel to it. Some people talk about it too- "The water's going to run out." "The oil's going to run out." "The debt will destroy the economy and the city will become a war-zone". "tomorrow we will die, so today, we live." That kind of thing... It's a bit to get used to when you come from Vancouver where people are more busy worrying about weather to allow biking and roller-blading in the same lane on the sea-wall than weather or not the new patch of hives on the back of your neck is related to the fecal dust cloud roiling up in the distance. 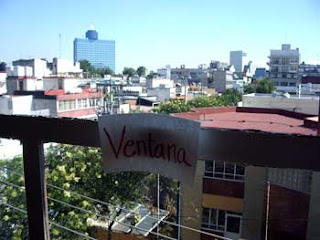 All this considered, I'm having a great time. Although it's polluted, this city is super vibrant. there's always something going on and many Mexicans are friendly and relatively easy-going by my standards. You can eat cheaply in many places and the food is really tasty. I went to this place north of town this weekend called, "Tepostlan" and stayed with Ale and her friends at her friend's house. It's this beautiful valley surrounded by low mountains with amazing rock formations. It looks like a place from the cover of a sci-fi/fantasy novel. We danced and drank and wandered around the marketplace. It's one of many Mexican places that's so nice it attracts people from all over the world esp: new agers, and neo-hippy types. Despite the new influxes and popularity, the traditional inhabitants of Tepostlan seem like pretty interesting people. Apparently there was a popular movement among the locals there that turned into a pretty major protest when the Government tried to approve a huge resort/golf course monstrosity almost on top of their beloved and sacred mountains. The outrage was so intense that the local government offices were closed down and the entire city went on a general strike of some-kind. The good part is that the government gave in and the resort was never built.
Posted by two-way at 1:00 PM

So now the comments work and should be emailed to you.