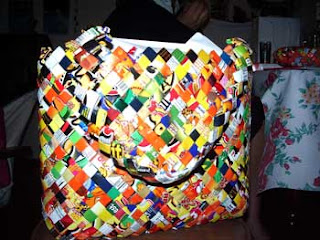 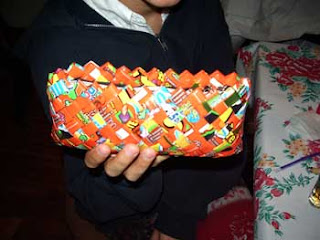 I guess it's now very behind the times to be talking about the US elections. I imagine that the coffeehouse banter has slowed in Vancouver and elsewhere with coffee houses and banter to suit. There's a coffeehouse down the way, but it's a bit expensive and pretentious- think of Soma on Main St, but with fancier furniture. I do miss Vancouver already, but that's to be expected when you come from such a nice place. A friend of Ale's bought these bags. I call them gumbags because they're made of folded candy wrappers. I think a few of my regular readers may recognize and appreciate the handiwork. One things for sure- this took a long time and the hands that made them were small and skilled. Fill in Los blanks amigos. Still what do I know? They could have a machine somewhere churning out these things. Somehow, I don't think so though. Mexico seems to be full of these ingenious crafts folded and woven and carved from all sorts of materials and as I write this piece of meaningless drivel I can imagine someone furiously folding together purses and baskets. Viva la NAFTA homies!
Posted by two-way at 1:27 PM

How much are the bags?