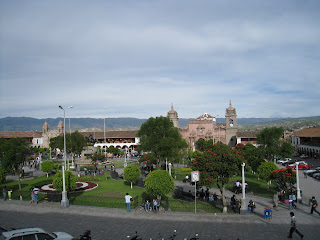 It´s carnival week here in Ayacucho and that means lots of processions and bands and stuff going on in the street. Actually, there have been processions in many andean towns during the months of January and February. It´s kind of fun accept for the one yesterday that was a funeral procession which was more serious. We are awoken each morning and sometimes the middle of the night to the sound of andean flutes, horns and drums parading the streets which is why I still don´t have any photos of said processions, we are usually sleeping and not parading around. We did have a nice night in the park last night. Where we just sat for awhile and chilled out on a bench and watched the youths of Ayacucho hangout. Actually the people of this town are quite out and about. It seems every night there are throngs of people down in the square walking about with kids and socializing etc... People seeem to go for Chicken at night in Peru. Roast chicken is the typical cena meal maybe washed down with a few beers. We are trying to hang out here a bit and study some of the Spanish notes we got during our brief but intense classes. It´s a bit hard to study on the road when you´ve got to move on all the time. 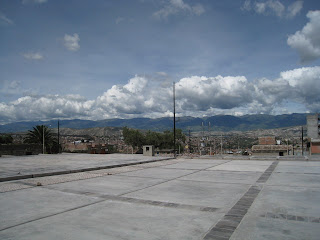 Here´s a small square we walked to yesterday which was full of little artisan shops. Apparently this is the place to buy straight from the producers and there was some amazing craftsmanship on display. Many rugs with agaraian themes and meanings. Rugs that tell stories all hand woven from wool or Alpaca. There was of course a lot of other neat stuff too, but we are constantly battling the wanting of trinkets and stuff with the reality of weight. Backpack weight is a big issue when backpacking as you can imagine. We end up bantering and negotiating quite a bit about who carries what and who´s carrying more and all that. Every kilo counts when you´ve got to lug your pack around in the heat or heave the whole thing onto your lap on a chicken bus that bounces along some dusty road. Fortunately we´ve been able to travel by fancy bus and taxis when we´re not in the mood for roughing it so the question of weight hasn´t been too intense or contencious for that matter, which is good but I won´t surprised if I end up with some giant ceramic bull and a rug under my arm by the end of this crusade. 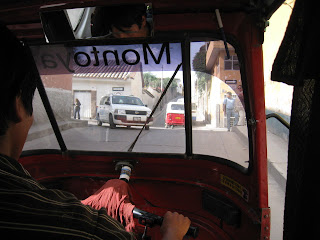 Most peruvian towns seem to have legions of moto-taxis to get you around. The convenience and price is great but the pollution from their little two-stroke engines isn´t. That said we´ve been using them pretty unsparingly. 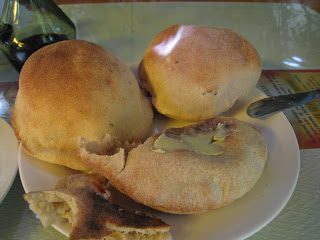 We´ve been eating quite a few of these in the mornings with jam and butter. Chaplas they are called and delicious they are! They are puffed-up like pitas and a little sweeter and a little gummier than pitas but very similar. I seem to be getting a lot of vista type pictures and many pictures of food. As usual I miss out on the picture perfect moments because I´m just not obnoxious enough to whip out the camera when there´s interesting stuff going on like five old women in the market hacking up a giant side of meat while a giant, furry hound looks on from down below anticipating scraps or drippings. There is a lot going on in this busy little place, but I haven´t yet been able to photogistically capture the total Vibe yet. It´s hard. We are also constantly vigilant here as there is a tradition during this time of year for people to throw water buckets and water balloons on passers-by and Gringos are no exception. We have been hit a couple of times already, and there have been many missed attempts. Yesterday three little girls chased us down the street loaded with balloons. They pegged us in the end. It´s quite fun, but we also don´t want to be soaked every day so there´s a bit of strategy involved. Now we know the spots and times when water thrower people are most likely to lurk. Cuenca Ecuador was a little more daunting as most attacks were drive-by style and you could not anticipate as easily. It makes the day interesting at any rate. Anyone want to play ´hit the gringo´? hehe...
Posted by two-way at 4:25 PM

I need to encourage you how crave a period
do surf internet a day?
And what are you doing?
Working, chating, searching strange information?
And what your [url=http://www.olympusds2300.com/ ]favorite site[/url]?