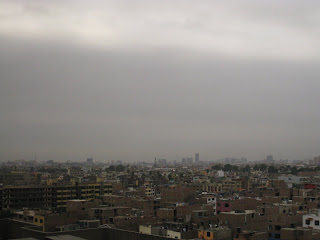 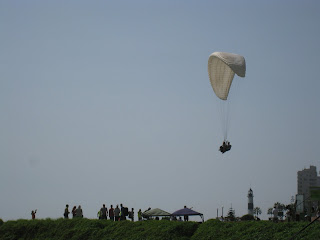 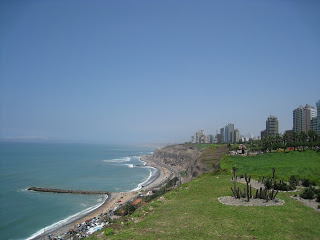 Well here we are back in Vancouver just looking out our window... Actually, no we are currently in Lima, Peru and it´s one of our favourite places so far. Wow! It´s quite crazy and huge and fun, hot, pretty, sad and surprising. People are relatively friendly and maybe a bit more outgoing than in other parts of Peru that we know so far anyway. It´s a giant place. It seems people have poured in here from all parts of Peru. Getting around is pretty crazy. There isn´t really any central, easy to use transit system so we´ve been mostly cabbing it around, but we´re currently staying in the trendy, wealthy Miraflores district which is really comfortable and safe and beautiful. Our hostel is merely a block from the flat expanse of the Pacific ocean. 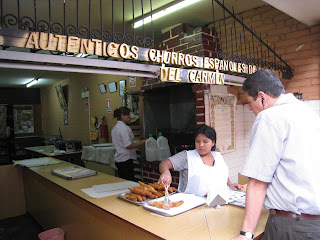 One of the big treats in Lima so far has been the food. Actually the food all the way from Ecuador to here has been pretty good and at times amazing. Especially the seafoods. This is an authentic spanish churro stall that we discovered downtown. Imagine fresh, hot out of a giant copper pot cream-filled churros. We´ve learned that you need to look around at where and what the locals are lining up for and simply make the line to see what all the fuss is about. Generally, the fuss is about something and something good! 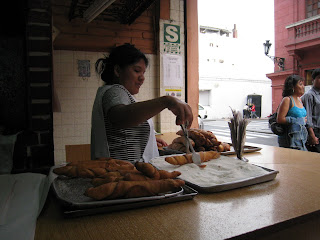 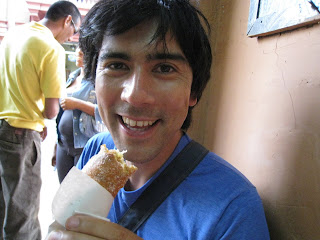 Dowtown has a crazy busy feel and at times it feels as if it´s coming apart at the seams. If you venture off the well-beaten track, you immediatley see the more unseemly side of Lima. Clogged dark streets with hawkers of everything, dusty potholes, carts of produce and discount sneaker shops stretch into the dusky, smoggy distance. The traffic is practically un-regulated (there are scant traffic lights), but somehow, through honking and shunting and brute jostling, Limas clogged arteries flow. 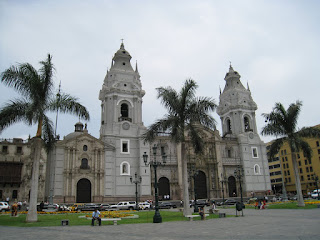 The dowtown area has some handsome plazas and fountains and a few parks. Since arriving in Peru we´ve been sampling some of the local beverages as well. Pisco sours are strong and delicious and refreshing but don´t overdo it. The interesting thing is that people drink this one often just before a big ceviche lunch. Woah. And I´m supposed to present myself back at work after that? I will try to post some catch-up stuff. But basically we´ve been making our way down the Peruvian coast. We learned that we won´t be able to go up to Machu Picchu. It´s totally rained-out and the mountains are riddled with mudslides and basically a lot of people are flooded out and miserable. We are not sure if we want to be in the middle of that, but we´ll see how things shape up after this week. Hmmm... Uh, can´t think of more to say today. We´ll play catch up later.
Posted by two-way at 2:26 PM