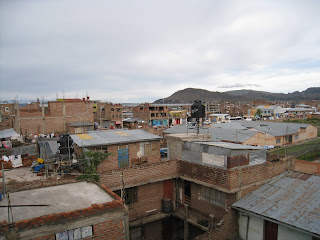 AS we are finding out there are Low times and High times up here in the Andes, and the times don´t get much lower than when Machu Picchu is closed and it´s raining quite often. The good part is that rooms are cheaper, you can always find a nice one and you are not always feeling like you are simply part of some giant qeue of tourists bussing, flying and plodding methodically from site to site, even though that might be what you are doing. We are in Puno Peru which is a pretty nice little bustling town perched on the shores of Lake Titicaca, but even here things are what you might call ¨dead¨ as touristing goes. We are liking the relative mellowness of the tourist trade, but are finding it a bit weird being the only two people in a giant resteraunt full of tables with aproned staff looking-on as we dine on Alpaca medallions (only me non-veg)and try not to talk too loudly because the place is so quiet the squeaking of the forks on our plates sounds obnoxious. I kid you not, every place we go into is simply abandoned and while our dutiful Book-Wearhouse purchased guidebook exclaims ¨crowds of locals and tourists alike rub shoulders in this friendly and bustling room while delicious local food is served and nightly live music resounds¨ it is dissapointing to be whispering in a corner over two plates of drab food while over-dressed waiters glower at you from behind the cash desk. We have decided to simply use the guide as a way to know where the resaurants are and then find out where the crowds are eating. This has worked for us so far on this trip. I admit it was probably our fault for tying ourselves too much to the Guidebook, as helpful as it has been. It seems, just like the weather up here, tourist traffic is a changeable thing. There is also the strange element of gringoesque restaurants always having a CD changer full of some kind of early 90´s top 40 NOrth American music compilations. I can picture some restaurant manager saying to the staff, ¨Now don´t screw with this selection. This is what the tourists like. This is what they want to hear, so don´t go putting any of that Salsa or Cumbia crap on there!¨ What it ammounts to is me feeling like I will go crazy if I hear Eric Clapton singing about his Father´s Eye´s or that horrid ¨Where Have All the Cowboys Gone?¨ song again. 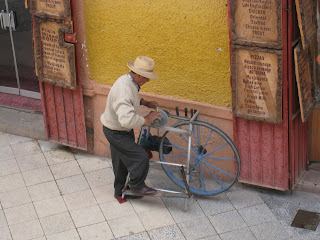 In this picture you will find a man who sharpens knives using a bicycle type contraption on the street. It seems he goes around to the restaurants and does their knives. 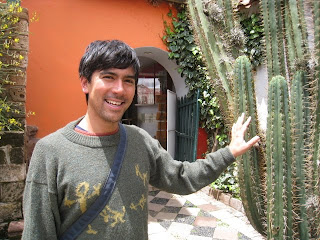 and this other picture is of me doing what a lot of people do around here almost all the time - squinting! Yes, squinting into the powerful light of the midday sun. I´ve never seen the like. You practically need to put sunblock on at night up here! If you have light complexion and do not put on sunblock and spend more than a half hour in this intense low-ozone filtered high-altitude sun, you will get a skiers sunburn that somehow gets under your chin and eyebrows like you spent the day on a glacier! It´s amazing white burning light, but it does really feel nice when it breaks through the frequent passing rainclouds. It is an excercise in extremes and it makes everyone, tourists and locals alike have this permanent Dirty Harry / Marlborough Man expression on their face, that is, unless you want to be the only one in town wearing sunglasses, which apart from military badasses, don´t seem to be that popular amongst the locals.
Posted by two-way at 12:15 PM

head soccer unblocked is a web page on the topic of our sport. Here we have many games like head soccer and head soccer 2 or Big Head Soccer . soccer heads And Big Head Football or big head basketball there is your great experience about football . Good luck

I thank you for the information and articles you provided