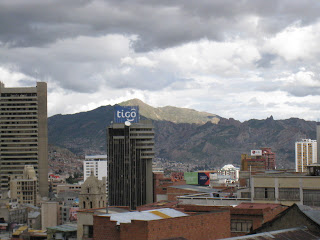 Well, we are in La Paz still. We´ve actually found a great place to stay so we´ve decided to hang out for a bit here in this city. We will head to Sucre or maybe Cochabamba on Sunday, but we will have to see how things go. I was remarking in my last post about how strange it is to see people from distinct cultures or places ¨acting¨ or sort of performing for the tourist cameras. Anyone who comes from a heavily touristed place will understand what I´m talking about. Things can get even weirder when the average daily income in a place is 100 times less what it is in your country. When I saw the villagers of the Uros Islands greeting us with a familiar greeting in forced unison it reminded me of the TV show FAntasy Island where all visitors recieved a Lei and drink with an umbrella in it as soon as they stepped off the plane. I found myself being constantly on-gaurd for this kind of behavior. For awhile anyone in customary indiginous dress that seemed a little too clean or made-up I regarded as a ¨performer¨ and it made all sorts of things seem staged to me. Much like the Native carver I once saw Japanese tourists videoing at the mouth of the Capilano Suspension Bridge, these people seemed to be putting on a show. I suppose we´ve all done similar things - especially for money, but when the behavior is extended into the confines of your home, it seems even weirder. Hayley was good enough to point out, however, that while a lot of men on the Island of Taquile, for example, wore customary dress when soliciting rooms for the night and then changed into more mass-fabricated modern clothes for the morning chores, most indiginous women of these communities continued to wear their traditional clothes at all times. Maybe it´s not all a performance then. I´m still not sure. If you go to NYC and get a cab, do you think that guy is being particularly familiar and projecting a NYC attitude to help the tourist have an authentic experience? Hard to say I guess... Well, enough of that. WE are currently in La Paz which is a big city and full of all kinds of inauthentic and authentic people alike. 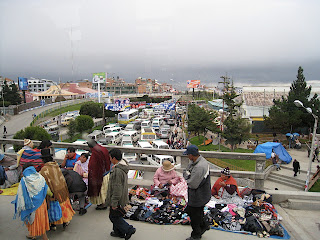 The sprawl of La Paz up above the valley is called El Alto and it´s the Ayamara capitol of the world I´m told. I´m pretty sure most people are too busy hustling here to worry too much about weather or not things look good for the tourists. What I do know is that this snack food known as a Saltena and is basically a baked empanada full of juicy meat or veg stew is constantly orbiting around in my mind as I walk the streets and wonder what we should do for lunch.
Posted by two-way at 10:50 AM

sooo jealous of you two!
glad to see you completely escaped the olympics! i hope you subletted to bank roll the trip! give us an email when you get back sweet cheeks!!!!!

sooo jealous of you two!
glad to see you completely escaped the olympics! i hope you subletted to bank roll the trip! give us an email when you get back sweet cheeks!!!!!

Donkey Kong Unblocked. is a revival of the Game Boy Donkey Kong.The goal is to help Mario rescue the Princess. . In this flash game remake of the original Super Mario Unblocked.game, you can play as either Mario or Luigi. Speed around tight turns to cross the finish line in first place in the cool racing games from Car Racing Games
. Play Run Unblocked or Run 3 Unblocked and Run 4 Unblocked Game. You enter in a prohibited zone which is full of dangerous holes.