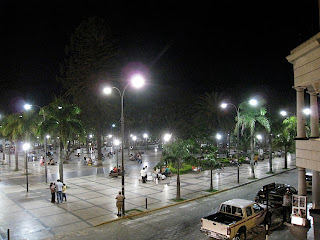 I´ve got little time to post and this connection is too slow for photos, but I´ll just say that we descended down down down into the very hot and steamy jungles and arrived in Santa Cruz Bolivia tired but thrilled at having ridden the bus yet again down from Andean heights into the Amazon basin and then a little bit above it. Santa Cruz is very hot nonetheless and a fairly handsome and laid-back kind of place. This is definitely the most prosperous Bolivian city we´ve been to. There are people of many cultural backgrounds here and the wealth of the bolivian oil and agro industries is readily noticible. Hipsters and middle class families ply the streets in fashonable clothing and SUVs along with the rest of the riff-raff. Despite it´s wealth and sprawling nature, the city of Santa Cruz´s nice spots are fairly navagable on foot. We are now up in the highlands if you can believe it as we have returned up here to the jungly rainforests for one last gasp at the Andes! ...and then it's home to work and other stuff. Neither of us are really ready to leave this part of the world, but we have so much we have to do back home and more importantly, we are pretty much out of money and while I relish the thought of being here longer, it's pretty hard to keep up the fun times and travel on Bolivian wages assuming we could even get gigs down here. It's always best to end on a good note, so back into the arms (or rather, the arms of our friends)of Vancouver we go! To those in Vancouver - see you soon!
Posted by two-way at 12:22 PM

Its like you read my mind! You seem to know so much about this, like you wrote the book in it or
something. I think that you can do with some pics to drive the message home a little bit,
but instead of that, this is fantastic blog. A fantastic read.
I will certainly be back.

I am truly grateful to the holder of this site who has
shared this enormous piece of writing at here.

Wow that was unusual. I just wrote an really long comment but after I clicked submit my comment didn't appear.
Grrrr... well I'm not writing all that over again. Anyway,
just wanted to say fantastic blog!

For hottest news you have to visit internet and on the web I found this web site as a best
web site for most recent updates.

I'm really impressed with your writing skills as well as with the
layout on your weblog. Is this a paid theme or did you customize it yourself?
Anyway keep up the nice quality writing, it's rare to see a nice blog like this one these
days.

Hi there great blog! Does running a blog like this require a large amount of work?

I've absolutely no knowledge of coding however I was hoping to start my own blog
in the near future. Anyway, should you have any ideas or
tips for new blog owners please share. I understand this is off subject however
I simply had to ask. Thanks!

I like this article! Also, check out my RedSnow site
here: http://www.redsn0w.us/

Wow, this paragraph is good, my younger sister is analyzing these kinds of things, therefore I am going to let know her.

This is very attention-grabbing, You're an overly
skilled blogger. I've joined your feed and stay up for searching for extra of your excellent post.
Also, I have shared your web site in my social networks

Beauty salons are one of the ideal places to enhance the overall
beauty of individuals. ignoring them and typing away, the sound of water spilling from the filter into.

Staff is also required, that includes a qualified salon manager and qualified therapists.

This excellent website definitely has all the
information and facts I wanted about this subject and didn't know who
to ask.

Personal injury lawyers normally have poor reputation particularly in major cities.
In 25% of fatal motorcycle crashes, the motorcyclists
crashed into a fixed object like a telephone pole or a
concrete abutment. And if there's any doubt a clinic is bogus, Morales says you need only watch
to see what happens when a truly injured person happens to come
in.

my web-site ... Injured in a car accident (http://www.youtube.Com/)

Nevertheless, with this specific software, you merely put what app
you wish to unrestrict and that's it. Doing your investigation and studying
the boards will allow you to flawlessly jailbreak an iPhone.